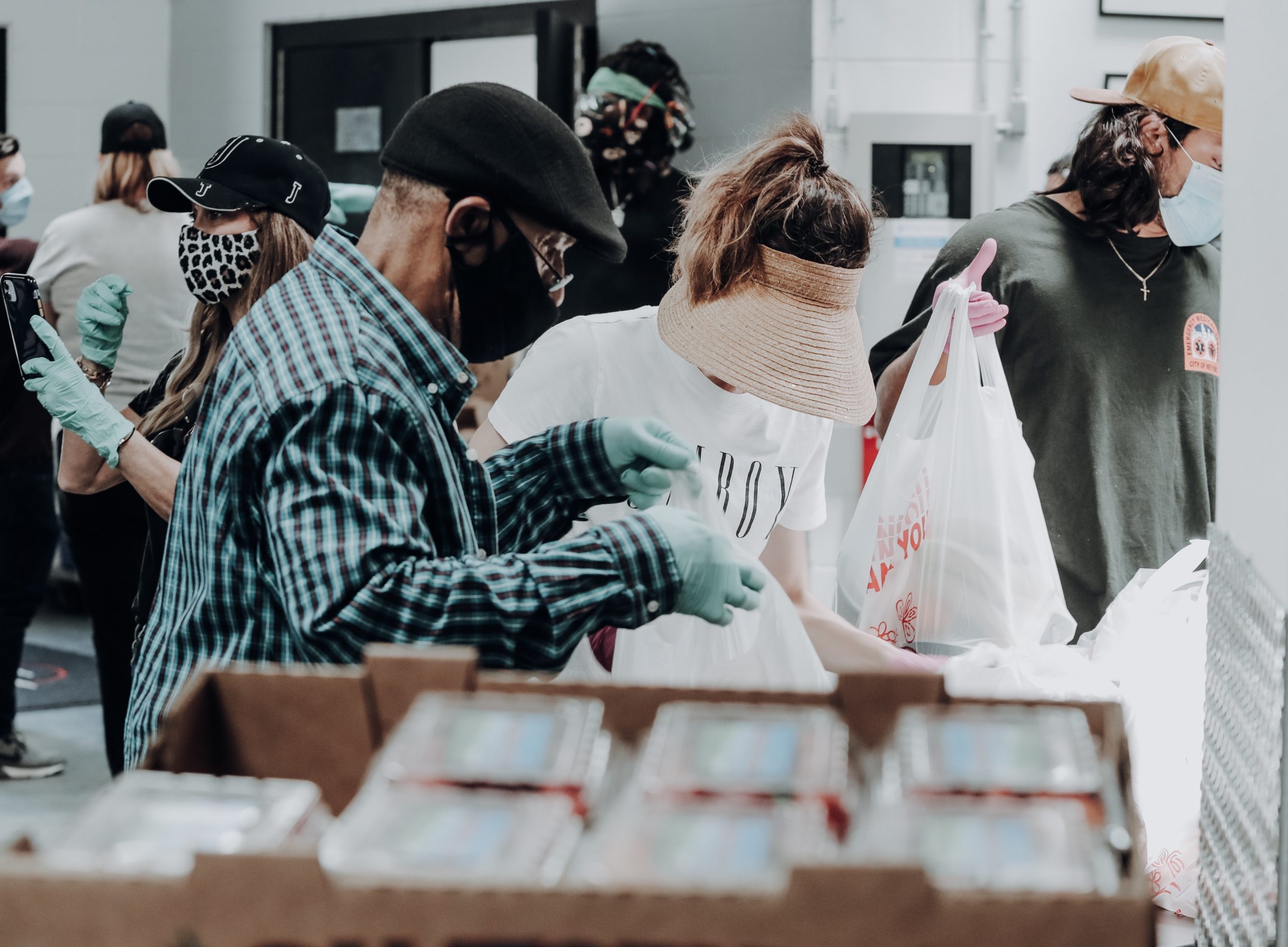 Katie doesn’t know what to do with me. There are seven of us here today and as she rattles off assignments, I hear everyone’s name but my own.

Everyone gets up to start work and then it’s just Katie and me. She’s looking a bit frazzled, in a good way. In that way when you are doing 10 things at once and making progress at all of them.

I’ve been volunteering at Lakeview Pantry for the past few months, but each time I come here, there is still so much to learn.

“Hi Katie,” I say. “This is only my second shift at this location. Where would you like me?”

Katie looks up and says, “Good question. Walk with me.” I’m racing to keep up with her as she flies down the stairs. “You can do RTE,” she says over her shoulder. She points at the Ready To Eat station, bins of cans and packages that look pretty messy. I can see there are donation bags thrown underneath and that it all needs sorting. This is the section where packers can grab food for people who don’t have a kitchen. They may live in a shelter, on the street, or in an SRO. They can’t really take anything too big; a full tube of toothpaste may be too much to keep track of.

My job was to sort cans of tuna, soup, peanut butter, cheese and cracker kits, and other grab-and-go things. But mixed in there were cans of soup and tuna that needed a can opener. I stood there for while wondering if these counted as ready to eat? At first, I thought of course, you don’t need to add anything to this chicken soup. But then, I had to imagine every step, things we take for granted, like if you don’t have a stove or a microwave why would you have a can opener?

the view from inside the pantry

It’s a week later and I’m back for another shift. This time, it’s me and several “newbies.” Weird how quickly you catch on and become part of the team. After we all get our assignments, we all get to work. There are a lot of people here today and I’m dodging palettes of milk and people rustling by with bags and boxes in their arms.

This is the main Pantry, where I’m volunteering today. Normally, it would be set up a little like a grocery store with volunteers behind the counter and clients coming in to choose what they want. But of course this is not normal, no one is allowed inside because of Covid. The Pantry has had to pivot and figure out new way to do business.

They had to pivot quite a bit actually. Not just in terms of how they serve clients, but what they do with the increased amount of donated and purchased food. Since there are so many more people in need, there has been so much more food moving in and out and that food has to go somewhere before it gets put into a family’s box.

With four different locations and so many ways to distribute food, the Pantry relies on thousands of volunteers. It feels like a beehive in here, each person racing to and fro. But while it seems a little chaotic at times, it’s really a well-oiled machine.

Here are the tasks I’ve done so far at the main location and at the “Hub”:

I’ve been volunteering at Lakeview Pantry since I felt it was safe to do so, about three months. It’s only a mile or so from my home in Chicago, and it’s an organization I have some history with. My relationship with the pantry is an old, untended one. Back in the 90s I wanted to volunteer. I had a history of nonprofit work, licking envelopes and office work, which was fine. But I wanted something more visceral, something that was absolutely necessary to life. Food.

The Pantry at that point was operating out of the basement of St. Als, an old, beautiful church. I would arrive and walk downstairs to a teeny room with boxes of produce and a few shelves of canned goods. My job then was to actually hand food to the clients who came in one by one. I remember waiting behind my little table like a store clerk hoping for customers. I don’t remember a rush or even lines. Just chatting with folks one by one as they came through.

These days Lakeview Pantry distributes food six days a week via five different programs. They offer weekly and monthly pick-up, online ordering, and social services. Since the pandemic began, they have opened up to all of Chicago rather than place a geographic limit on eligibility. The need is that great.

It’s easy to get lost in the work, and it is work. We lift boxes, sometimes 20 or 30 pounds. Other folks move much heavier items. At the Hub, the really cool folks drive around re-arranging palettes of turkeys or eggs.

Each shift I think about the people who will be receiving this food. I think about when they open the box, and then again when they start to cook. I imagine what I could make with this pear that has a bruise, or this extra large can of ready-to-eat spaghetti, how I would might try to make it last several meals.

After a Pantry coordinator mentioned how much busier they are this year than in a normal year, I started thinking about numbers.

I asked Carrie, Manager of Pantry Programs, to give me an idea of the statistics. She pulled out her phone and showed me staff text conversations where they share daily tallies. Lakeview Pantry counts everything. Every box, every pound, you name it.

The most important numbers are the clients of course. It’s hard to wrap your mind around the incredible increase in the number of people who need help.

She said they experienced a surge of 400% over the summer and while those numbers cooled in the fall to just a 200% increase over last year, she expects them to go back up. At the end of my shift this week I learned we served 262 households that day. That translates into about 600 individuals. And that is just on a Monday.

Back in April, they thought this crazy uptick in need because of Covid would be temporary. But now, seven months later, we know the damage to people, families, businesses, and the economy will be bad for a long time.

what can you do right now?

I’m writing this from my living room in front of a lovely fire that my wife just laid in the fireplace. I have music on, I’m connected to the Internet, and am about to make dinner from a freezer full of meals that I’ve been making (that’s another story).

I am one of the lucky ones and I know this. I am thankful every day and I am committed to doing what I can for people who are having a tougher time through this pandemic. It’s easy to hit the “donate” button, and while the amounts we give may not be huge, I know donations of even $50 or $100 can make a difference to an organization. It may feel like these donations are a drop in the bucket, but I suppose that’s how buckets get filled.

My four-hour shifts at the Pantry are also a drop in the bucket. But this bucket is in front of me, it’s palpable, I can see the difference I’m helping to make just by being there and moving cans of chicken soup and tuna fish from one box to another.

There’s been no shortage of good works and generosity in our country this year. Not quite enough to wipe out the vitriol and horribleness of some, but I imagine for every good deed that we hear about, there are hundreds more taking place. It’s these gestures—large and small—that will sustain us.

We’ve been asked to do so much this year. But the need is still there and I’m still asking myself and now you: what can we do to help? If you can give money, do it. If you can volunteer at a place like Lakeview Pantry, do it. If you can carry the groceries inside for your neighbor, do it.

I’m a big fan of keeping it local, so if you’re in Chicago, consider giving or volunteering at Lakeview Pantry or the Greater Chicago Food Depository.

Wherever you are, there will be people in need and organizations working overtime to help them. Find those organizations and do what you can.

People uncategorized the meaning of life

Previous articleHow Does That Make You Feel?

Next article How to Not Write

Some of them work, some of them don’t. But all of them are important to creativity and storytelling at work.