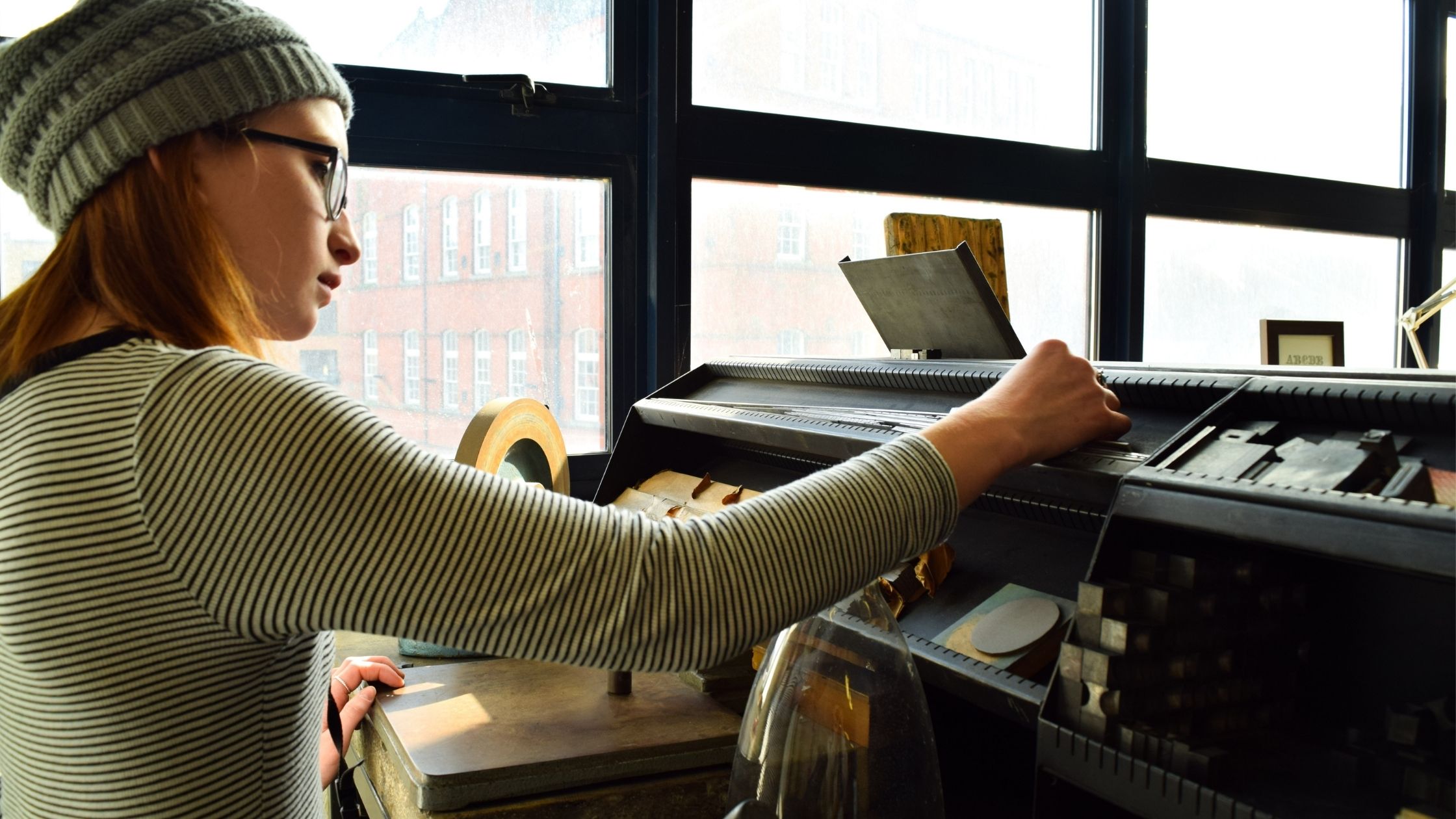 Semicolons aren’t so bad. But that whole don’t end a sentence with a preposition really gets me, sort of. And what exactly is a run-on sentence if I have a lot to say and it all comes pouring out and I throw a few commas in there won’t my reader understand what I’m trying to say?

In our Story Mode Writing at Work classes, we see a lot of students who are also petrified of writing, commas, and punctuation in general. But more than that, they are unsure and afraid of their own writing voices. The working world has a way of putting great pressure on us mere mortals. We don’t want to fail and we don’t want to let down our teammates, or worse, make fools of ourselves.

TYPESETTING AS ART
Back in the Stone Ages (circa 1988) some magazines still used a typeset machine before being sent to a printer. For a long four months that year I was an editor at a now-defunct theatre magazine. I took two buses and an El train to arrive at a low-slung building with no natural light and spent the day with five other editor/writers, all with pale skin and paperback books piled on their desks that were devoured over the lunch break.

The artists featured in the magazine had entrusted us editors to make sure their heartfelt biographies would be read just how they were supposed to be read. It was our job to make sure the exact idea and emotion were communicated in exactly the right ways.

But the job required enormous concentration and patience, and a love for editing that I didn’t yet possess. I didn’t trust my command of grammar, let alone commas. And the responsibility of interpreting the actors’ poorly written sentences felt like a heavy burden.

One day I had to carry some revised work back to the typesetter’s area (yes, I was serious about that; our magazine was typeset in an adjoining office). I couldn’t imagine anything more boring than her job of typing our corrections into her machine. But when I found her that day, she was standing up at her station and dancing to music only she could hear. When I asked her what was so fun, she spread her arms out and said “This. You see typing, I see art.”

And that’s when it clicked. Writing and editing are art, not science. We put our own voice into the words and that means there is no absolute right, and no absolute wrong. Grammar too is not an absolute and even there we have a chance to stamp on our own imprint. Like the typesetter, we can see our work as a magical opportunity to transform ideas into useable messages. As business writers—just like novelists—we must be firing up our imaginations and using our creativity for everything we produce, even a basic message reminding folks to turn their cameras on during virtual meetings.

CREATIVE CONFIDENCE IS COOL
So instead of fear, we should feel powerful. Instead of worrying so much about those commas, we should think about the bigger picture and trust that our skills will make the words mean exactly what we want them to say.

For all you writers at work who get a stomach cramp at the thought of writing another paragraph, the answer is to dance to some music only you can hear.

Jill’s Suggestions for Hearing the Music Before You Write At Work:

1. Work on building up your Creative Confidence and stop being so nervous at the thought of writing that letter for the CEO.

If your supervisor has given you some latitude, take it. Hand in a draft that may be pushing it a little. Sure, this requires you to hear the voice and personality of that CEO, but then you have an opportunity to add in some of your own flare. You can always dial it back and put in some company C.R.A.P.* if you really have to. Remember, your best chance to add some artistry is usually in an early draft.

2. Type with your eyes closed and without letting your fingers stop moving. (Might want to put on a good Spotify list too to drown out reality.)

This isn’t just whimsy. The impulse to correct spelling and get rid of those red, squiggly lines in Word while we’re typing is one that we have to overcome. It stops our rhythm and train of thought. It makes us submit to some artificial intelligence that doesn’t know nearly as much as we do about our subject or our craft.

3. Do a quick warm up, like describing an object without using its name. Even if you do use its name, focus on the minute details you may have never noticed before. Like the way the library tape yellows and frays over time across the spine of TX769.B56.

Choose three objects in the room and make them come to life in a crazy, silly scene where they dance and have to pull bananas from a tree.

4. Take our Business Writing FUNdamentals class online and learn everything you need to know to be a brilliant writer at work.

Seriously, if you need to learn new skills, build creative confidence using practical tools, or want a refreshing new approach to writing at work, we got you covered.

*Corporate Rhetoric And Pomposity, otherwise known as jargon and CRAP

Next article To Listen, or Not To Listen

Some of them work, some of them don’t. But all of them are important to creativity and storytelling at work.